Clash of the Titans: Six Must-See Castles in the Greek Islands

Scenes of sieges, battles and bravery: set sail on a trip back in time to discover the mighty island castles still standing proud on the Greek Islands. 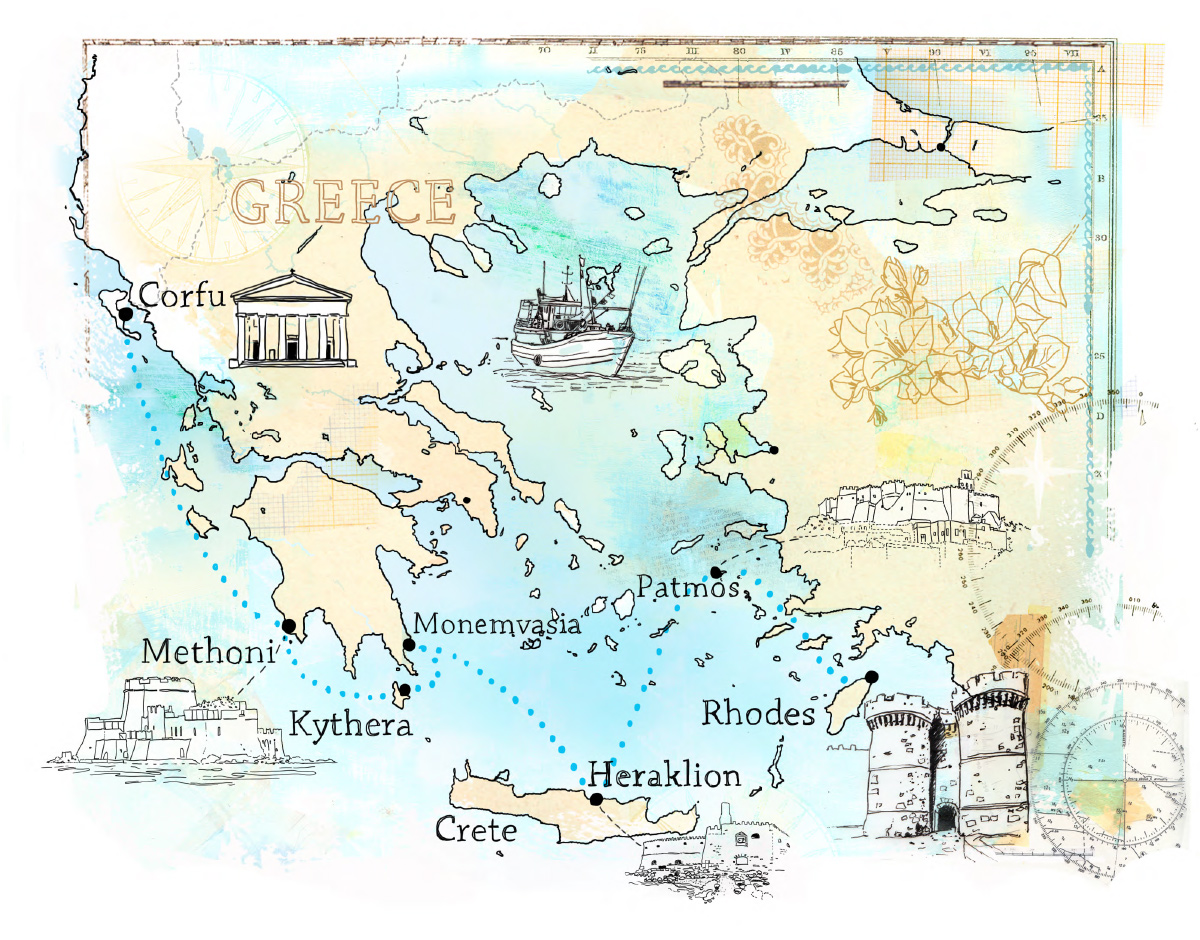 Byzantine, Venetian, French, Ottoman, British — Greece’s rich history has seen its fair share of invaders and overlords. Today, many of its most beautiful islands still bear the scars of ancient battles and are home to mighty fortresses that once held off marauding hordes. Set sail around some of these important islands, where you can drop anchor beside castles built by knights, pillaged by pirates and defended by brave soldiers, and discover the secrets that still lie within.

How Many Castles Are There in Greece?

Some sources suggest that there are over 1,000 castles, fortresses and towers in Greece, many scattering the coastlines of the Greek Islands. Though exact numbers are unknown, there are many sites saturated with the history of the land that can be admired and enjoyed by visitors.

What Are the Castles in the Greek Islands Made of?

Most of the castles in Greece were built from Stone and often leveraged natural defences, being positioned atop hillsides to overlook the islands surrounding seas. Many Greek castles include a tower, and some included advanced defensive features. 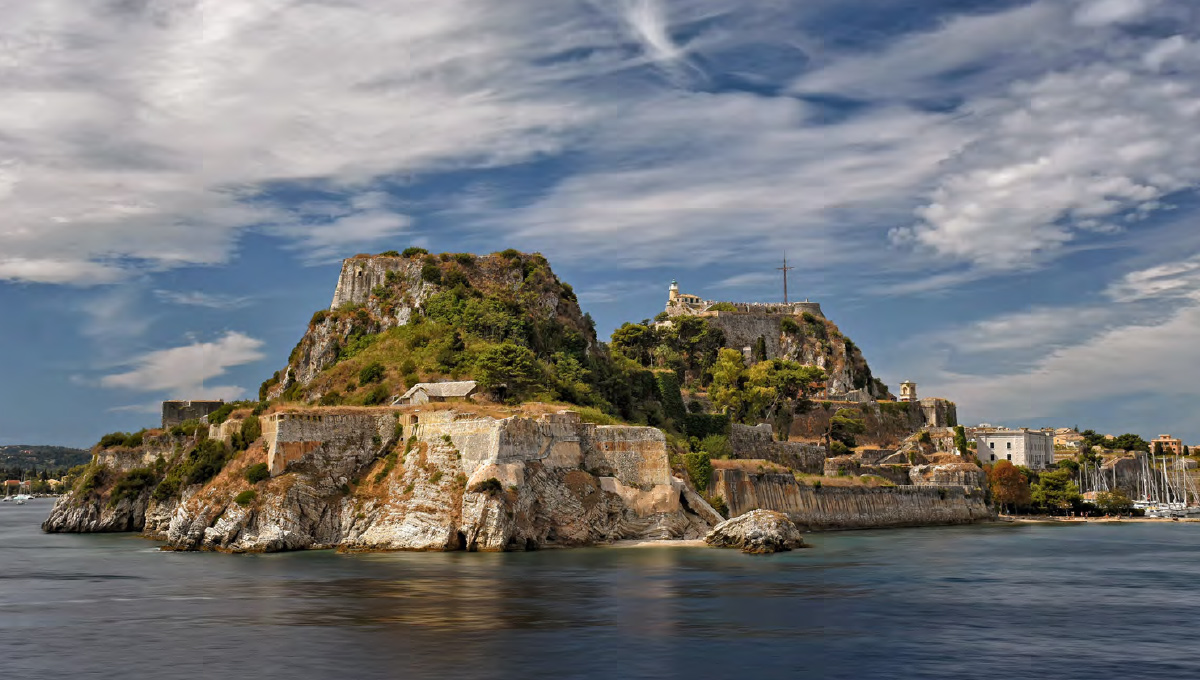 Our Favourite Castles
in the Greek Islands

Flanking Corfu town are two historic fortresses that have faced their fair share of action. Visible from the sea, the aptly named Old Fortress was built by locals who survived Gothic raids in the sixth century. Strengthened and restored over the centuries, it proved invincible even when under attack by the legendary pirate and admiral of the Ottoman fleet, Hayreddin Barbarossa. Today it is an impressive monument, worth taking an enjoyable stroll around. Visitors can’t fail to miss the statue of the Prussian Marshal Johann Matthias von der Schulenburg, erected at the entrance by the Venetians in his honour after he successfully repulsed the Turkish raid of 1716. The second fortress, meanwhile, located in the west, was built by the Venetians between 1572–1645 and is therefore known as the New Fortress. Joined to the walls of the Old Fortress, it added further protection from raids by pirates and would-be conquerors. Today’s visitors will enjoy the peace and wonderful views of the modern city and the vast azure of the Ionian Sea.

The Castle of Methoni

Time seems to have stopped in the castle of Methoni. Built in 1209 on the site of one of the seven cities that Agamemnon was said to have offered Achilles to pacify his wrath, it is one of the most significant examples of a castle town in Greece.

Traces have been left by the Venetians, the Franks and the Ottomans, while during the years of the Greek revolution, it was used as a launching point by the Egyptian forces under Ibrahim Pasha. Consisting of two sections — the south with simple towers that surround the city and the stronger north section that was used as a fortress — the castle is united by a low wall with five towers. Inside, take time to visit the square on which stands the chapel of the Metamorphosis of the Saviour, as well as the nearby gunpowder magazine and the Ottoman baths. But the show is stolen by the little castle built on an islet south of the main fort, known as Bourtzi, which has served as both prison and refuge over the centuries. Kythera Venetian, French, Ottoman, English, German and Italian — all have lived in the castle that overlooks the town of Chora on Kythera. Here, three seas are visible: the Ionian, Aegean and Cretan. Known as the “Eye of Crete”, its roots stem from the 13th century and it was further strengthened in 1503 by the Venetians. A stroll inside reveals the church of Our Lady Myrtidiotissa, which once held the sacred icon of the Virgin Mary. The second castle wall surrounds the settlement of Mesa Bourgo (“town within”), which now has just its ancient churches still standing. Don’t miss a walk around the ruined Byzantine castle city of Paleochora, once the capital of the island. This 12th-century Byzantine fortress, with its many half-ruined churches, was destroyed in 1537 by Barbarossa and the people of Kythera never returned.

This steep, rugged island — separated from the Peloponnese peninsula by an earthquake in 375AD — is reached by a causeway built in the 20th century, which replaced a 6th-century stone bridge. The capital of the Byzantine domain of the Peloponnese, strict restoration guidelines have kept the fortified town in superb condition — and according to tradition, wedding ceremonies that take place inside the sturdy walls of the castle result in solid marriages. Famed for its wine, which reached all royal courts in Europe, Monemvasia was the only fortress-city never captured by the Ottomans. Lose yourself in the winding lanes full of bougainvillea bushes, visit the lovely churches, gaze at the stone mansions and feel that you are on a “stone ship”, as the island was described by famed Greek poet Yannis Ritsos, who was born here and is now buried in its land. 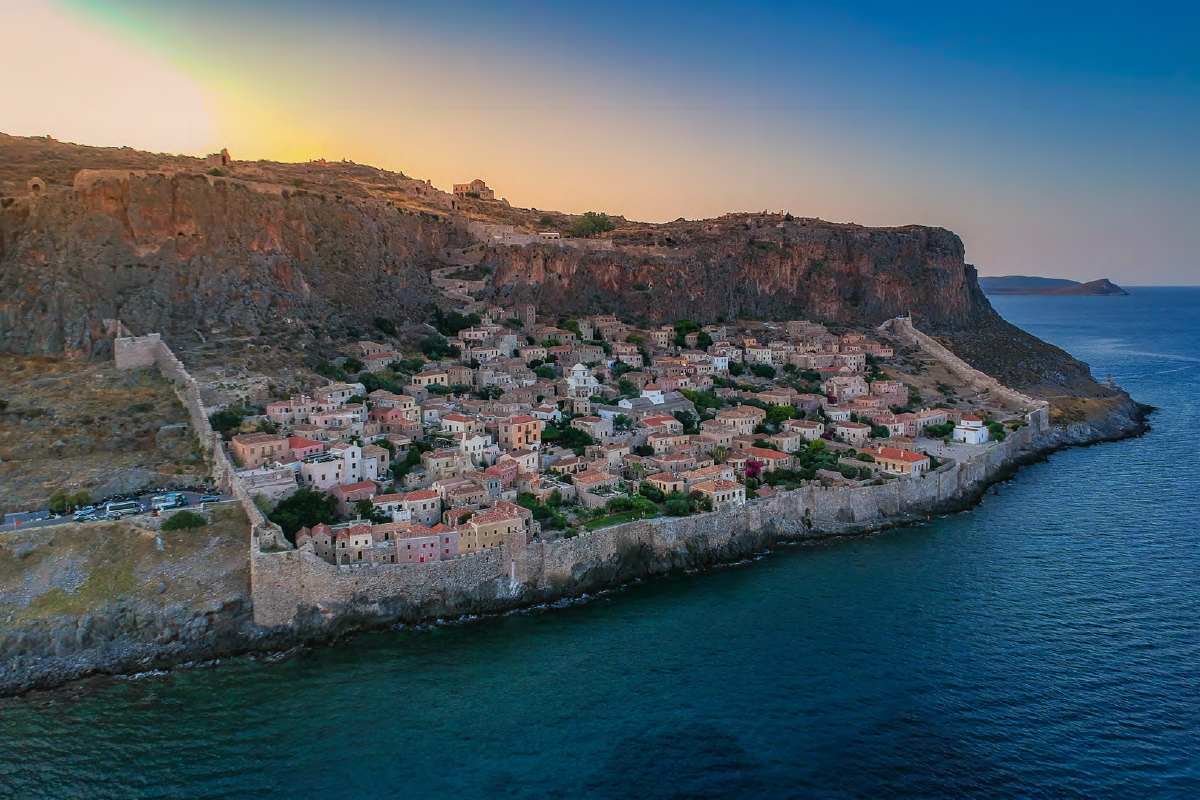 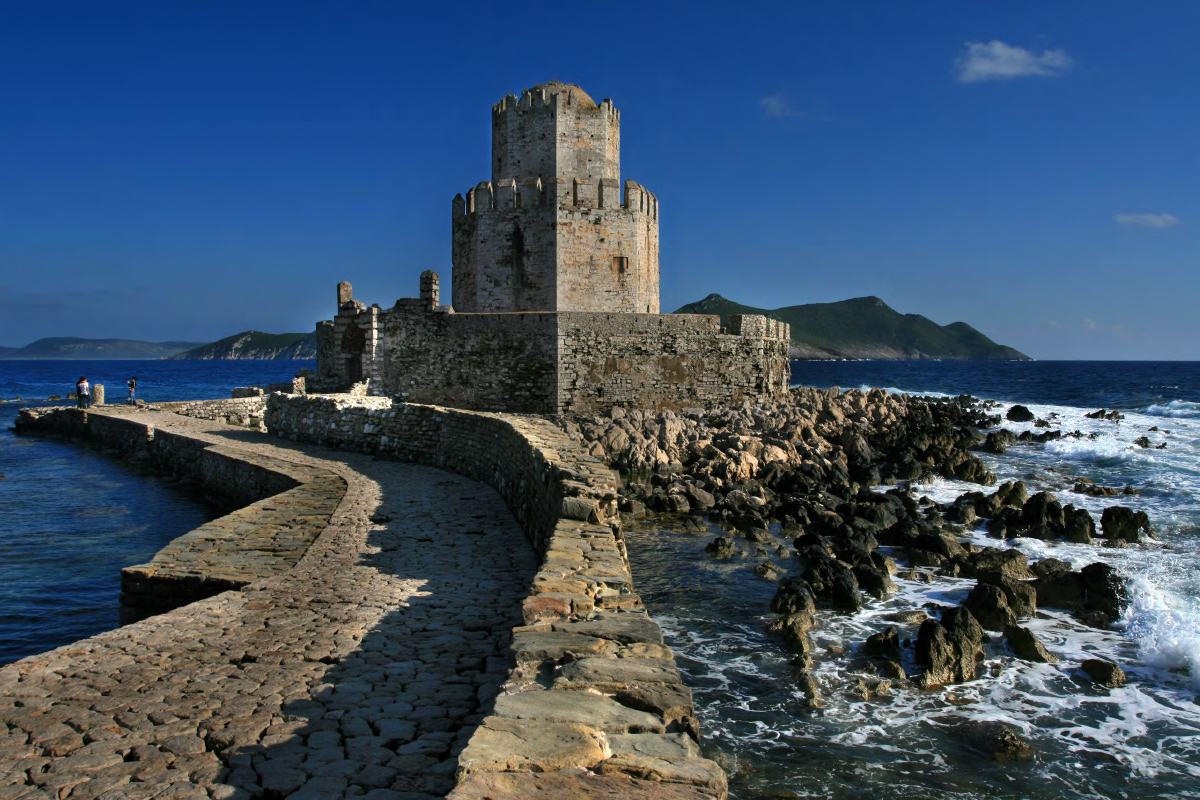 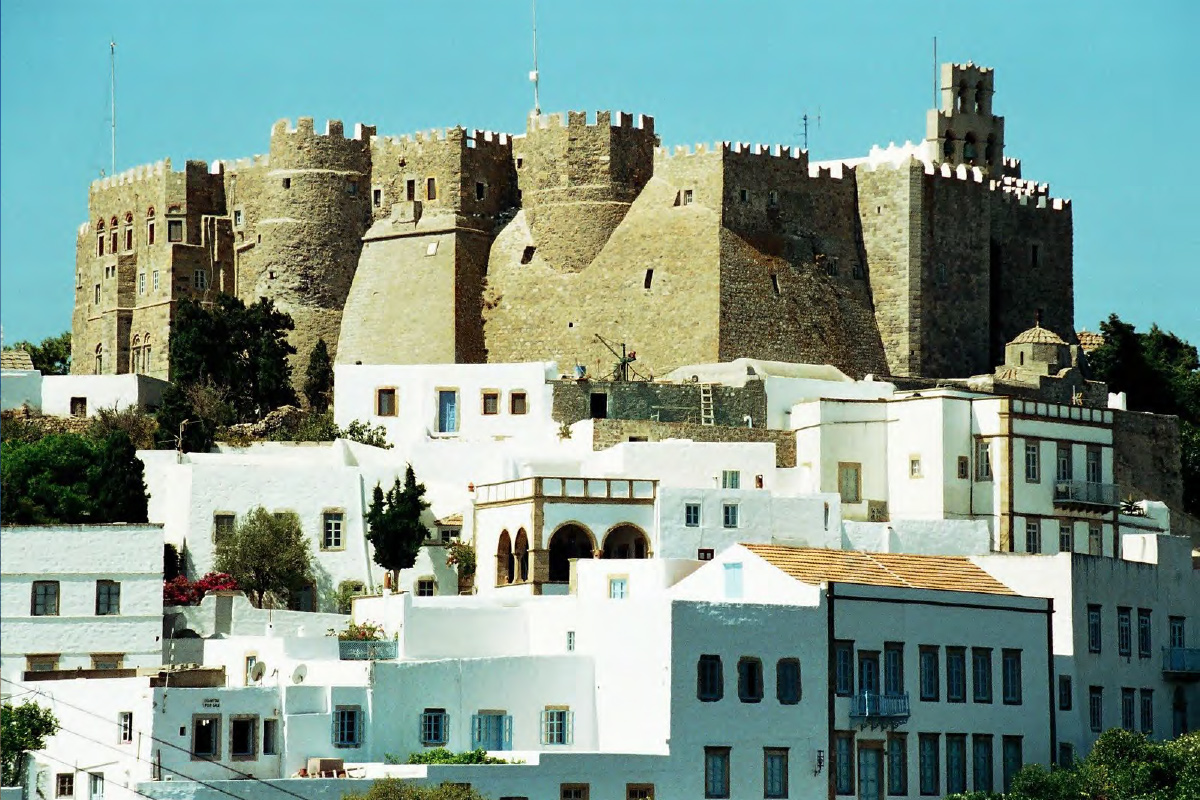 The scene of the longest siege in history — when the island’s inhabitants held off the Ottomans for 21 years until calling it quits in 1669 — Heraklion is considered one of the best-preserved fortresses in the Mediterranean. The existing walls were built in 1462 using what was then the most modern defence architecture and were completed a century later. Triangular in shape, it has seven ramparts and was surrounded by a moat, with access to its interior through four gates, which were placed on the four points of the horizon, and another three military gates providing access to the sea. With such magnificent defences, it was not for nothing that it was known as the Great Castle during the years of Ottoman rule. One of the most impressive parts of the castle is the square-shaped 16-century fortress at the entrance to the port, known by its Turkish name Koules.

With 15m walls towering above the skyline — and a hole over the main gate through which boiling oil or hot lead would be poured on aspirant invaders — the castle-monastery dedicated to St John the Divine, author of the Book of Revelation in the Bible, has made Patmos unique throughout the entire Aegean. Building on the ruins of an ancient temple of Artemis began in 1088, when the monk Blessed Christodoulos succeeded in having the entire island assigned to him by the Byzantine emperor Alexios II Comnenos. By establishing the monastery, he wanted to honour Jesus’ apostle John, who had written his book in the cave of St Anna, below the fort. Full of valuable objects, religious and cultural treasures and with a rich library, it is an important point of reference in the Christian world and, together with the island’s cave and village, is a Unesco World Cultural Heritage site. At the centre of the complex find the main chapel, dedicated to St John, with the chapel of the Virgin Mary nearby, which is famous for its 12th-century frescoes.

The Castles of Rhodes

Another Unesco World Cultural Heritage site, Rhodes is one of the world’s most well-preserved historic castles and the largest active medieval city in Europe. Both city and walls owe their architecture and layout mainly to the knights of the Order of Saint John of Jerusalem, who occupied the island from 1309 to 1522. Unconquered for two centuries, the city is divided into two by internal walls. At the north, visitors will find some of the island’s most impressive buildings, including the Palace of the Grand Master, the hospital that now hosts the island’s Archaeological Museum, a cathedral and the impressive Street of the Knights with its Gothic buildings lining each side. The south side is home to houses, markets and churches, public baths and other buildings dating from the Ottoman period.