Discover the real hot spots of the Aegean Sea with a tour around Greece's Volcanic Islands. 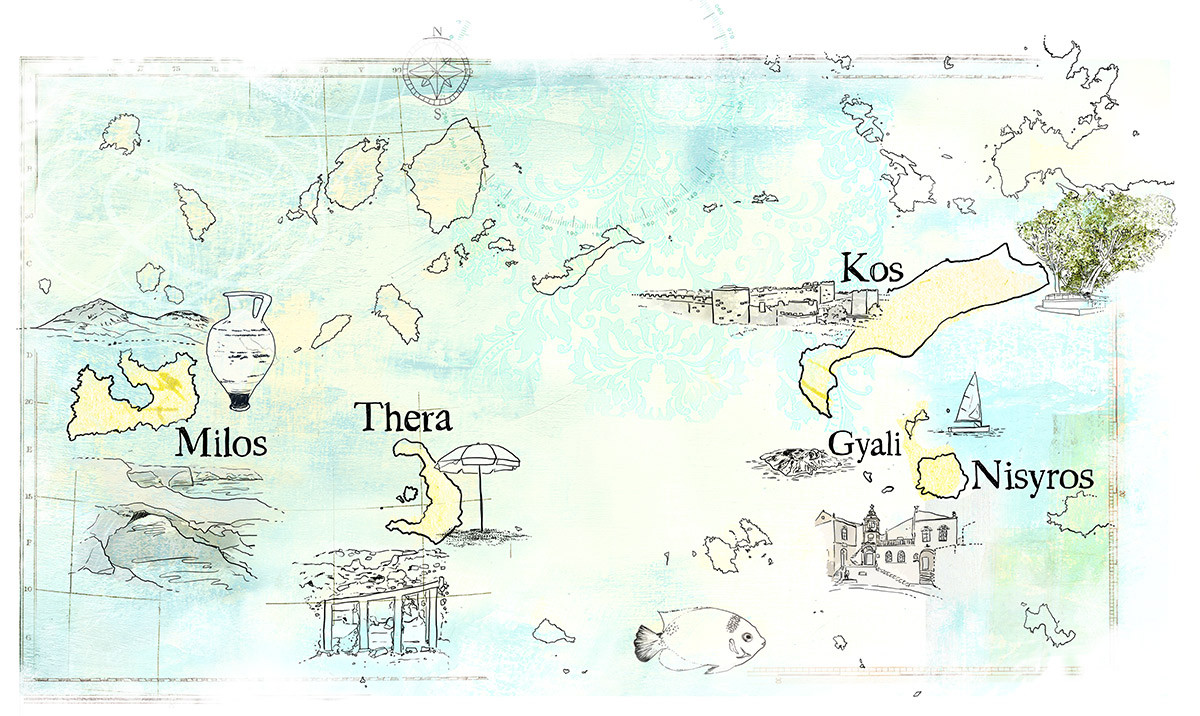 Withstanding raging waves and wild winds, it is easy to see that the rugged volcanic islands of the Aegean Sea were born of fire and ash. Full of myths and secrets, brilliant colours and beautiful beaches, drop anchor at these transcendent islands and discover their explosive history. 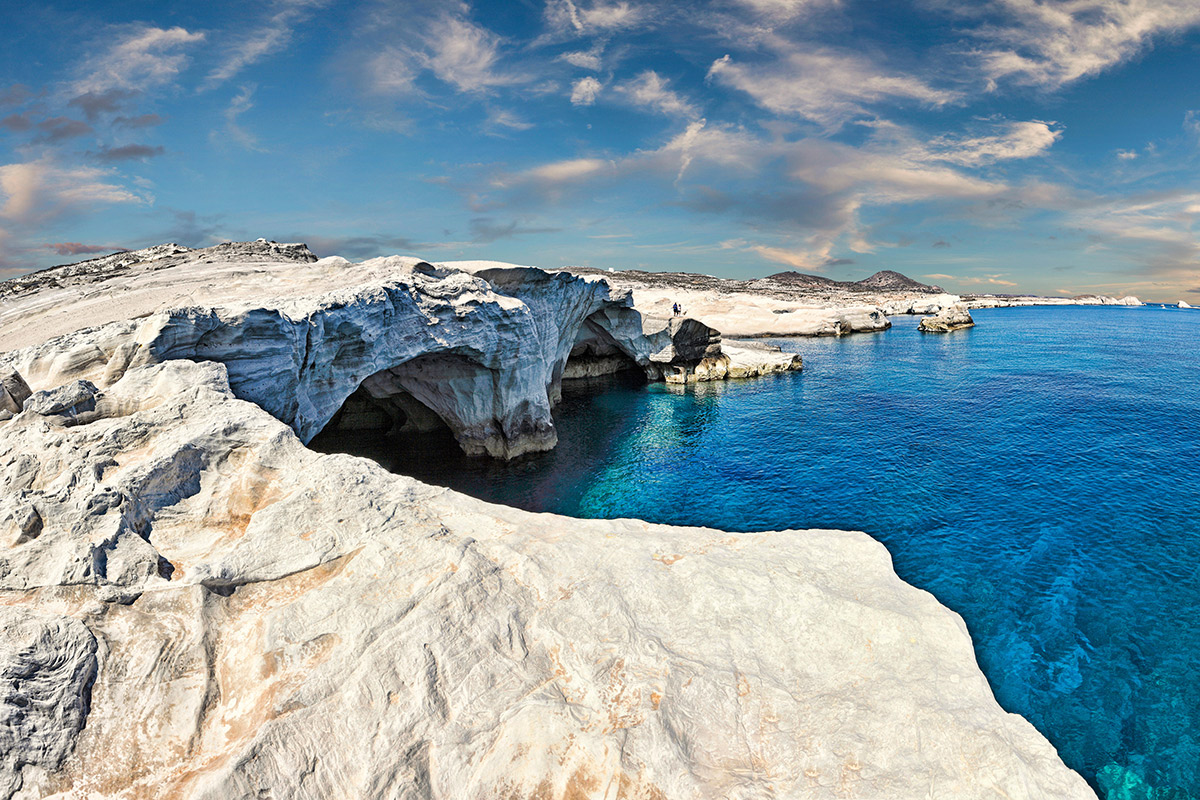 MILOS: Land of the Moon

This island, on the south-western edge of the Cyclades, may be small, but its name is known across the globe thanks to the ancient Greek sculpture Venus de Milo, discovered here in 1820 and now residing in the Louvre, Paris.

Priceless artefacts aside, Milos is renowned for its rich natural beauty. It was created by volcanic eruptions over two million years ago, which left it with a rocky coastline comprised of strange shapes and colours. The island’s two now-extinct volcanoes, Phyriplaka — which has an impressive crater 1.7km in diameter and is a heady 220m high — and Trachila were not the only witnesses to its explosive past: its highest point, the Prophitis Ilias mountain, soars to 748m and was shaped by the ancient lava flows.

The volcanic eruptions left 75 superb beaches, the most famous being the beautiful Sarakiniko. Here, the pure white volcanic rock formations tumble down into the azure waters giving the appearance of a lunar landscape. Works of art, these soft rock sculptures make it one of the most photographed areas in the Aegean.

No visit to Milos would be complete without visiting its famous caves. Start with Papafranka, with its stunning circular rock formations, and Sykia, where the sun’s rays create an incredible light display. Then head to the southern side of the island to the caves of Kleftiko, accessible only by sea, for an unforgettable diving experience. These caves were hideouts for pirates and bandits, carvings can still be seen on the rocks along with the remains of pirate ships that sought refuge.

Milos’ wealth of minerals has made it a very special place. The glass-like black obsidian found in its subsoil was chiselled out of one of the oldest mines in the Mediterranean and used to make weapons and tools. It was the source of economic growth, the inhabitants of Milos sold it on surrounding islands and mainland Greece, and the 11,000 years of exceptional mining history revealed in the island’s Mining Museum.

Head to Theiafa to visit an old sulphur mine with deserted galleries, iron bridges, tracks, and wagons. Go back further in time to the prehistoric settlement of Phylakope — one of the most significant bronze-age settlements of the Aegean — or the early Christian catacombs, underground galleries, and cemeteries at the foothills of the village of Trypiti. Dating back as far as the first century, they are the only ones in Greece to have been preserved.

Anywhere with a volcanic heritage will have hot springs and Milos has plenty, including Kanavas, Alyki, Provata and Pikropigi. It’s important to remember that, even though the volcano on Milos has not erupted for thousands of years, it is not considered inactive since the volcanic steam and gases sent into the atmosphere reach temperatures of 100ºC. 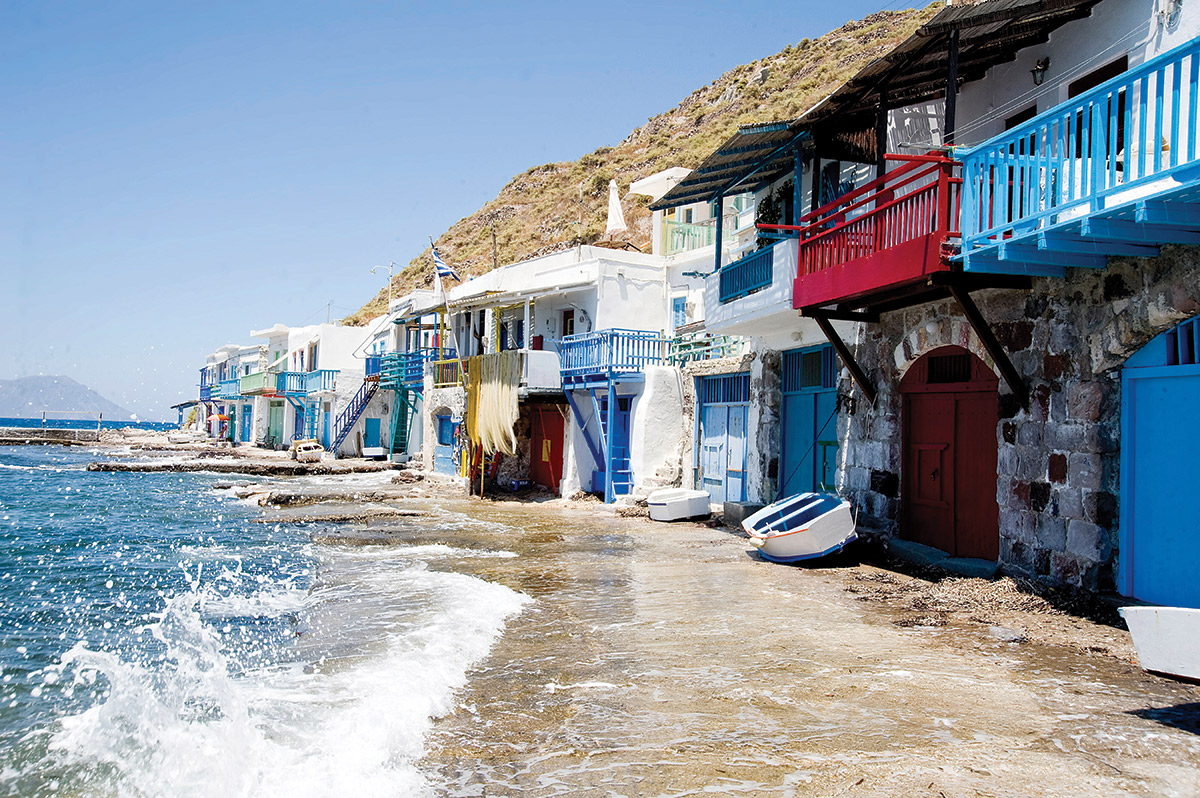 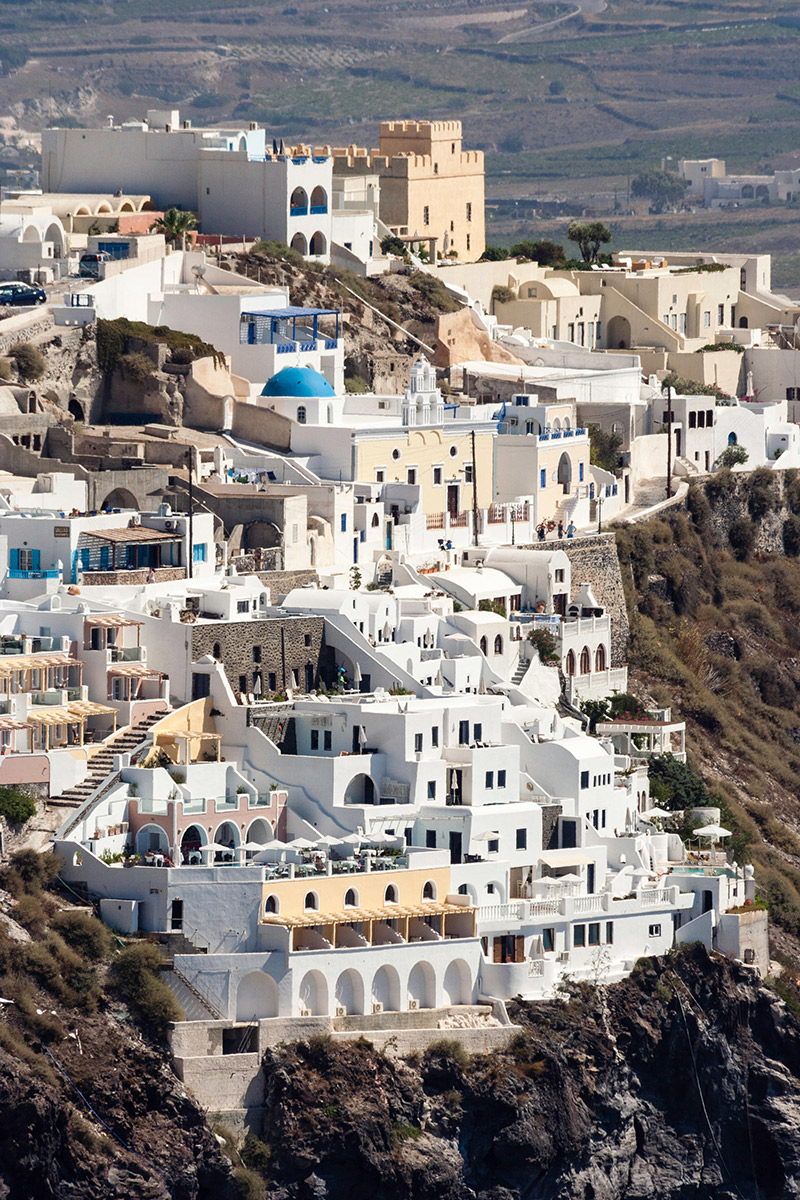 THERA: The Phoenix of the Aegean

Some say this beautiful island, with its striped cliffs of black and red soaring above its ancient lagoon, inspired the legend of Atlantis. Certainly, it has its own mysterious ghost city, Akrotiri, which, like Pompeii, lies frozen in time after being covered in lava and ash from Thera’s volcanic explosion in the 1540s BC. Unlike Pompeii, the residents had already left the city, leaving today’s visitors with glimpses into their lives via multi-storied houses full of artefacts and incredible wall paintings.

One of the largest volcanic explosions ever known occurred here, creating its wild landscape and incredible caldera measuring 60km in circumference. This caldera, amongst the most impressive in the world, is surrounded by the island of Thera and the remnant isles of Thirasia and Aspronisi, while in its centre are the active volcanic islets of Néa Kaméni (“New Burnt Island”) and Palaía Kaméni (“Old Burnt Island”).

It is an island that should be dry and inhospitable. However, just like the mythical Phoenix, from the ashes of disaster rises life. A land poets, artists, filmmakers, and photographers cannot resist, with its pretty, blue-shuttered buildings washed in glorious sunlight, perching precariously on the cliffs. Fira, Firostefani, Imerovigli, Oia… villages that clamber above and around the caldera and look out over the Aegean Sea from heights of 250m and more. Then there is Pyrgos, Karterades, Emborio, Ammoudi, Finikia, Perissa, Perivolos, Megalohori, Kamari, Messaria and Monolithos, each village with its own personality and history, and each with plenty of enticing reasons for visitors to pause their travels.

Called Callisto — the most beautiful — by the ancient Greeks, became known as Santorini in later centuries, a corruption of Santa Irini in the language of the western crusaders who stopped on the island to restock their wares. Thera, however, has been the island’s official name since its first colonist — and is loved, as it was then, but its visitors today.

Climb their terraces and wander through their narrow, whitewashed lanes. Live their festivals, taste their colourful produce, ripened in this strange soil, and let yourself enjoy the sweet giddiness of their world-famous wines. Discover the black-sanded beaches and bustling promenades. Surrender yourself to their charm. 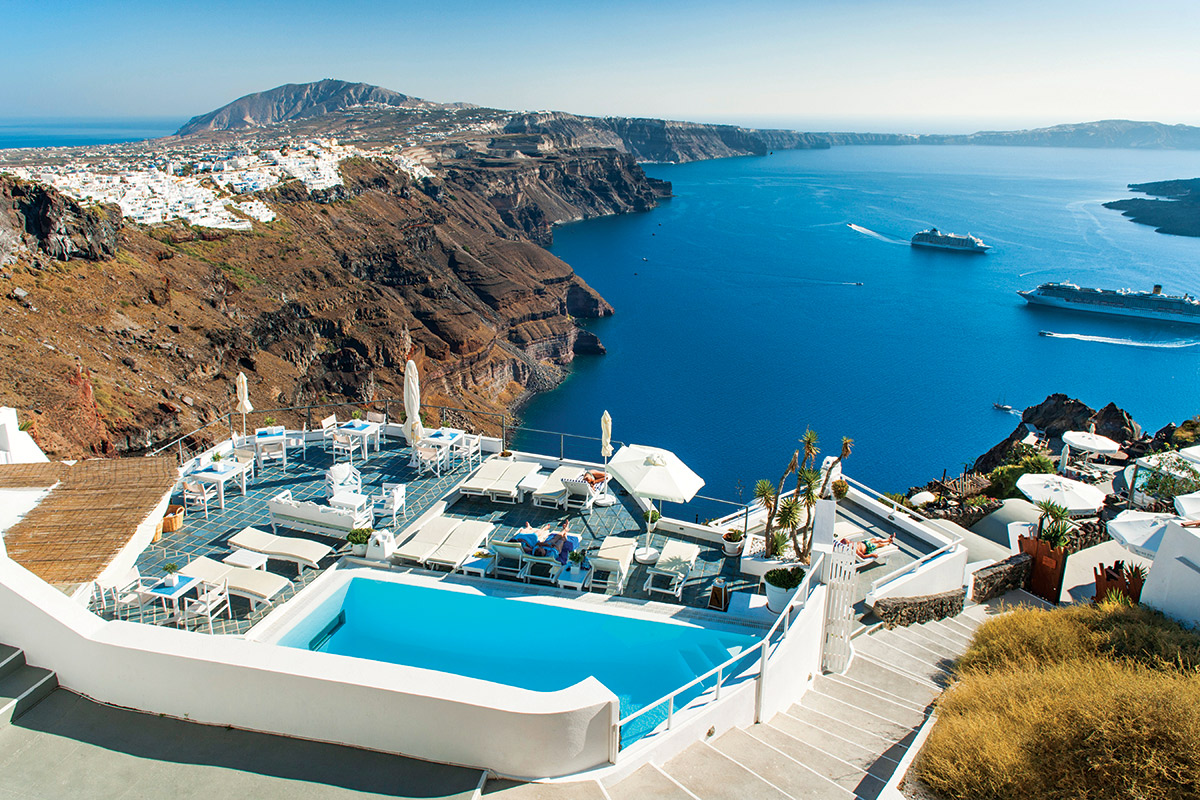 KOS: The Homeland of Hippocrates

Its beautiful beaches, bustling ports, winding streets, and incredible archaeological monuments attract visitors from across the globe. But few know the ancient, explosive history of Kos, which saw the largest volcanic eruption in the eastern Mediterranean, making it one of the most surprising of Greece’s volcanic islands. Some 161,000 years ago, 240 billion tons of molten were hurled into the air, covering the island in deep layers of volcanic rock and ash. This was also the last chapter, so far, of volcanic activity that began more than three million years ago.

The eruption left its imprint across the island, as did the people and cultures that followed. From the Ancient Market to the Roman Odeon, from the Hellenistic Altar of Dionysis to the medieval castles of Nerantzia and Kefalos, each ancient ruin is a monument to the ancient Greek, Venetian, Ottoman and Italian civilisations that called this corner of Greece home.

It was home to one of the most significant infirmaries in the ancient Greek world, the Asklepieion, built in the third century BC and dedicated to the God of Health, Asklepios. Its forward-thinking physicians followed the teachings of one of Kos’ most famous sons, Hippocrates, regarded as the father of medicine. The recently renovated archaeological museum is a must-see, visitors walk among ancient sculptures created by Cephisodotus the younger, Timarchus and the sons of Praxiteles, and discover the island’s close connections with Ancient Egypt.

The Castle of the Knights of St John is not to be missed, not least for the enormous plane tree of Hippocrates that sits in front of it. It is said that Hippocrates taught his students under this very tree — although at 500 years old, this ancient tree actually ca me centuries after the famous physician’s death. The castle of Antimachia, meanwhile, located on a small hill above a village, is the site of a tremendous local victory: in June 1457, 15 knights and 200 local residents battled against 16,000 Ottomans for 23 days, when the Turks ended the siege. This was the most important event in the history of the castle, which had been built a century earlier by the Knights of St John.

As well as its real-life heroes, Kos is an island steeped in the legends of Greek mythology. It was here that Poseidon, the god of the seas, fought the Giant Polybotes in the Battle of the Giants. Hercules also passed through Kos and was later worshipped in magnificent temples — Hippocrates is even said to have been one of his descendants.

Finally, a trip to the hot springs since Kos is the only island in the Dodecanese all three springs: hot, warm, and cold. Relax and enjoy the life-affirming properties of the water at Agios Fokas and Piso Thermes. 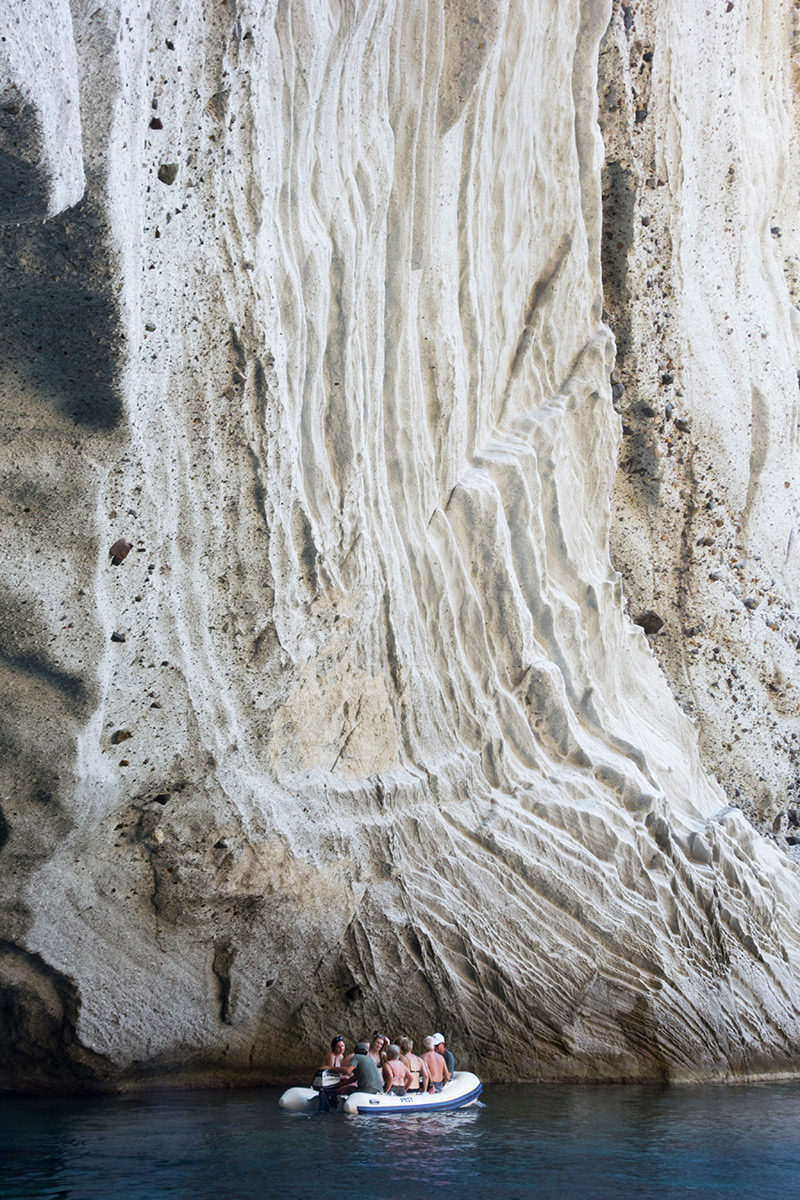 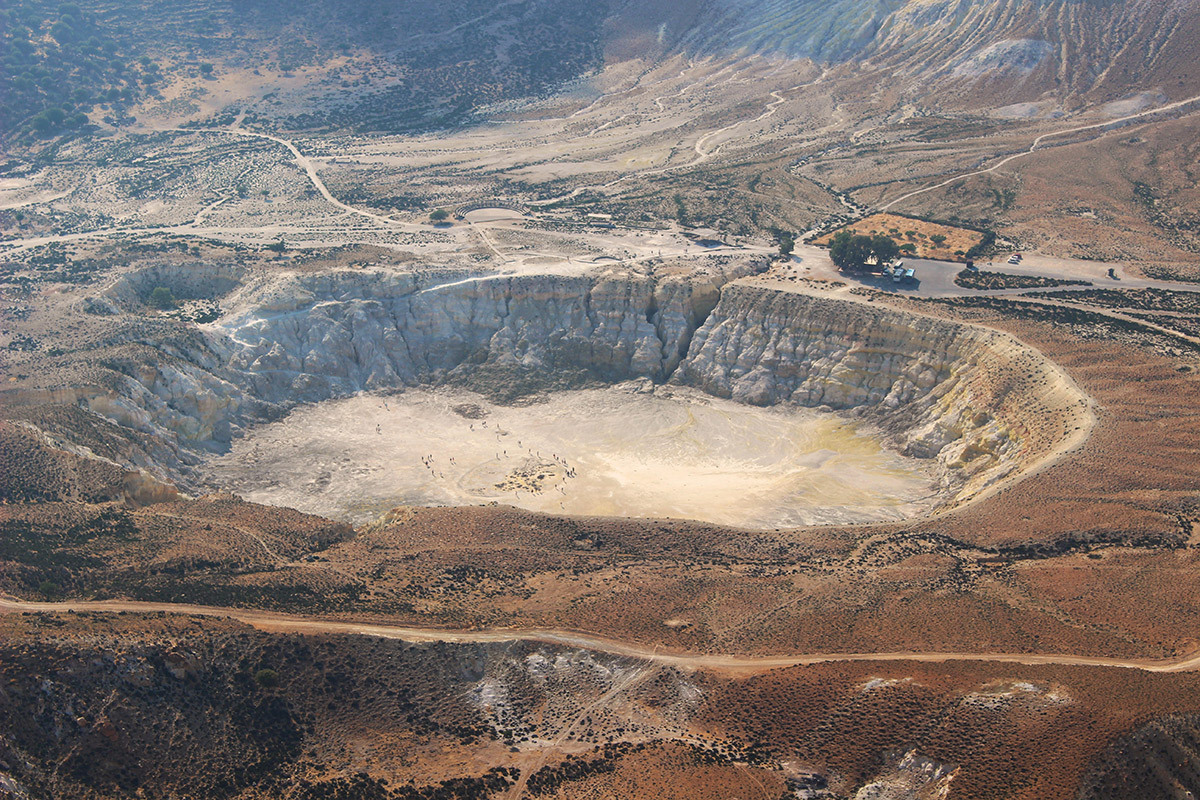 Amongst the smallest of Greece’s volcanic island, Gyali is full of soaring pine forests and pretty arbutus trees, but it is the prolific pumice earns it the title of a Landscape of Natural Beauty. Like its neighbours Kos and Nisyros, it was born out of volcanic activity, with two distinct segments — one consisting almost entirely of obsidian and the other of pumice — joined by a narrow isthmus. Experts believe it was created relatively recently, after the Kos volcano ceased to be active.

It is a site of great economic importance: it is one of the world’s top exporters of pumice, sending out some 900,000 tons per year. The island has only 20 or so permanent residents, but scores of workers arrive daily to work in the open mines.

Take a trip to its incredible caves, accessible only by boat, or visit the remains of a neolithic settlement dating back to around 4000 BC, with objects that show very early stages of metallurgy, dated between 6,000 and 5,300 BC.

From its impressive craters to its beaches imbued with eerie volcanic beauty, a walk on Nisyros is like no other. It will bring you face to face with its rich geological history and incredible natural surroundings, transporting you to a world of ancient Greek mythology, full of mystery and legend.

It would be hard to find a corner of Greece that isn’t invested with incidents from mythology, Nisyros is no exception. It is not merely a rock in the Aegean, Greece’s volcanic island Nisyros was born in the midst of a battle between a giant and a God of Olympus.

The giant was Polybotes, the God was Poseidon. During the Battle of the Giants, Poseidon cut off part of Kos with his trident and threw it at Polybotes. This piece fell into the sea and Nisyros came into being.

Although the myth tells us that the island was generated by a divine hand, experts reveal a different, equally fascinating version: starting life as an underwater volcano, it emerged from the sea about 150,000 years ago.

A series of eruptions during the next 135,000 years left an island volcano that we know as Nisyros today. Together with Methana, Milos and Thera, it makes up Greece’s active volcanoes. Small ash eruptions occurred here in 1871 and 1873, followed by a steam explosion in 1888. More recent seismic activity in the early 1990s has given the island the effect of a sleeping giant.

When you dock in the port, you will stand in front of an open geological museum: an impressive caldera with gases rising up from its depths — those who enjoy myths will identify these as the breath of Polybotes, the giant of Greek mythology after whom this crater is named.

The largest crater, though, is the elliptically shaped Stephanos, 27km deep and 330m in diameter. Take a walk around its surface full of hydrogen sulphide-puffing fumaroles — this landscape has provided inspiration to many photographers, painters, and moviemakers over the years.

But you don’t have to go as far as the craters to see the variety of ancient rocks and hot springs — head to Palaiokastro, the incredibly preserved fortress of the ancient city of Nisyros, to the bell tower on the church of St John, or the Theologian outside the village of Nikia to see the volcanic basalts, andesites and rhygolites that were used as raw material for these structures. Find out more in the Volcanological Museum, housed in a school building in Nikia where you can even witness an “eruption” with your own eyes!

Then relax and enjoy the island’s impressive beaches. Owing to the island’s volcanic nature, each beach is very different: Lies and Chochlaki with their smooth black pebbles, isolated Pachia Ammos under the volcanic rocks, or Avlaki, with its soothing, therapeutic springs — the perfect way to complete a truly volcanic tour. 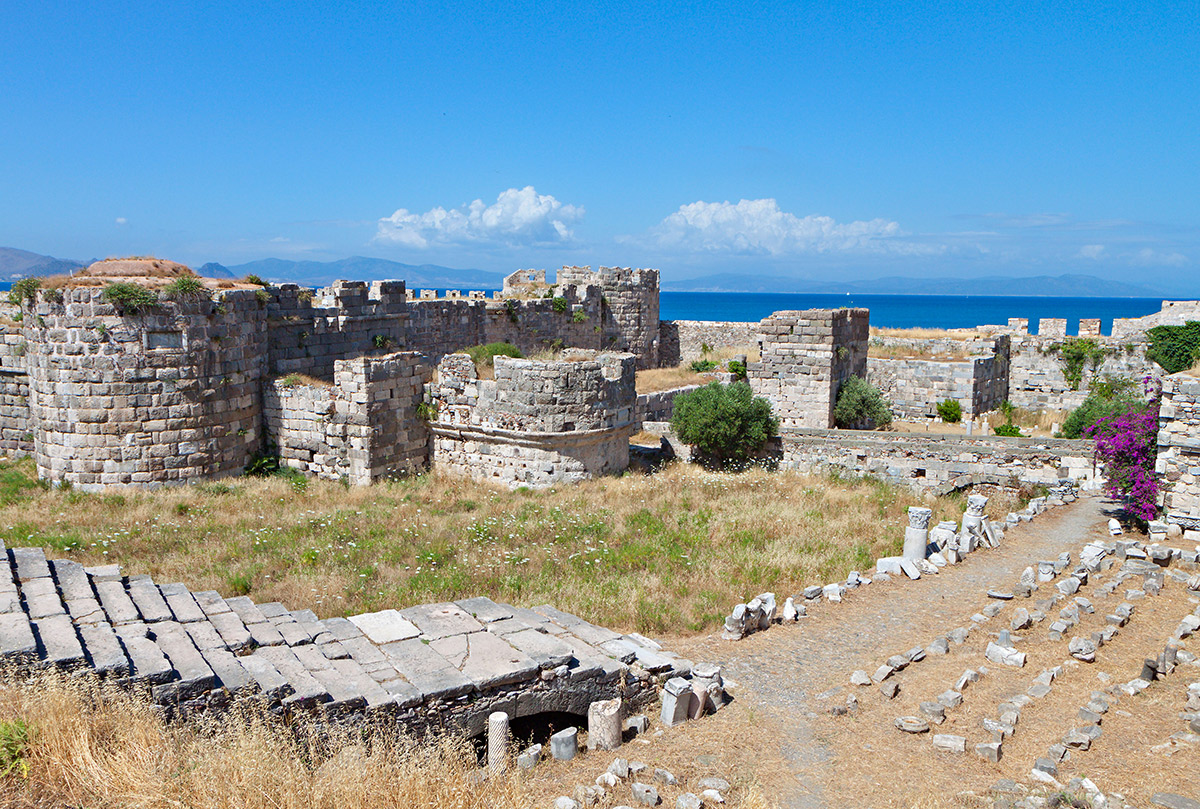